Recently, my husband and I stepped back in time for a few hours on a date that was both nostalgic and present-affirming. Although most of our fellow date patrons, having a median age of about 60, were probably not affirming the present so much as reliving the past. The date consisted of a matinée movie on an old and rather pixellated projector. It was shown at the local planetarium that has most likely not been updated for decades. They were serving locally brewed beer and classic candy in the lobby as they waited on us to take our seats before starting the movie. And to top it all off, the movie itself, ‘Midnight in Paris‘, was directed by none other that Woody Allen. If that doesn’t inspire nostalgia, I don’t know what will. But the irony of the whole experience was that the message of the film was about not living in the past. So many of us tend to view our own generation with the opposite of rose-colored glasses.  We eye each other with a cynicism that loudly exclaims how much worse we have it now than they did back in the day. How many of us have sighed and thought to ourselves that we were just born in the wrong era. If only we could experience the golden age of (fill in the blank). Or perhaps it’s not a time period that you covet so much as a location. If only we could live in Paris!  The air is pink there and music fills every street. Inspiration would flow freely and unabated and life would be so much better than it is here in (fill in the blank). But the truth is, as the film so beautifully illustrated, life is what we make of it. Despite how it seems sometimes, the grass is not always greener elsewhere. Generations prior to us also believed that they had it much more difficult than the generations prior to them . . . and so on and so on. If we are constantly envying people for their position or place, then we fail to see and experience the things that people will envy us for later.  This is the central theme of my blog. Learning to appreciate and really live now the things we’ll reminisce about later.  And then, when we do reminisce, it will not be a wistful longing for what might have been, but a happy remembrance of what actually was.  ‘Midnight in Paris’ was such a beautiful illustration of this idea that, although I could never claim comradery with such a brilliant man as Woody Allen, I felt it was to the world of film what I aspire this blog to be for its genre.  If you haven’t seen it, make every effort to do so.  It will make you smile and appreciate your life for what it is and not for what it might have been or could be. 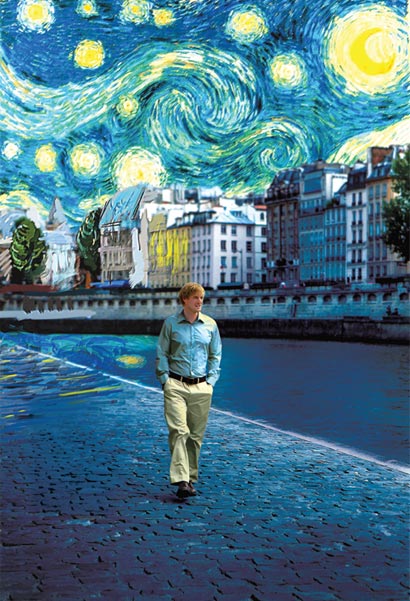